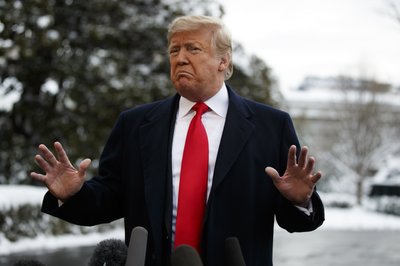 1/14/19
WASHINGTON — President Trump said on Monday that he has rejected a proposal by Senator Lindsey Graham of South Carolina to temporarily reopen the government in an effort to jump-start talks with Democratic lawmakers on funding a border wall. “I did reject it,” Mr. Trump said of the proposal, speaking to reporters as he boarded Marine One outside of the White House, en route to delivering a speech to a farm convention in New Orleans. Mr. Trump, advisers said, has refused to allow his acting chief of staff, Mick Mulvaney, or anyone else negotiating on his behalf to compromise on his demand for $5.7 billion in border wall funding. That has led to awkward moments in front of congressional leaders. Mr. Trump, advisers said, still believes he has the upper hand with Democrats. But people in the White House have become increasingly concerned as the shutdown drags on and public opinion polls have shown that the majority of the country pins the blame on Mr. Trump.

About 53 percent of Americans see Mr. Trump and the Republicans as mainly at fault for the shutdown, according to a Washington Post-ABC News poll conducted between Jan. 8 and 11. Only 29 percent blamed Democrats in Congress for the partial government shutdown that has left 800,000 federal employees working without pay, or furloughed. Adding to Mr. Trump’s rigidity in the shutdown negotiations is the anticipation among White House officials that a report from the special counsel, Robert S. Mueller III, could be delivered to the Justice Department in the coming weeks. Mr. Trump is agitated by the prospect of Mr. Mueller’s report, according to people who have spoken with him, even as advisers have tried to downplay what might be in it.
Click to expand...

Nancy and Chuck already told him no.

Trump is correct to reject that proposal.

The man is crazy and a menace to all. How the people allowed this man to become President is a question for the ages. How he is being allowed to stay as President is a question that will remain for all time. I guess that about 36% of the population are Masochists and love to be hurt and feel pain.
You must log in or register to reply here.
Share:
Facebook Twitter Reddit WhatsApp Share Link
Top Bottom