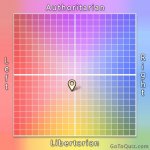 I have moved a bit right and more libertarian than five years ago.

Anyway, here are mine:

​
My results a few months ago were around {-4,-4}, so you could say that my views have shifted significantly. 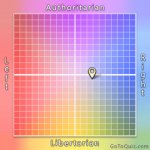 MaggieD said:
I'm not exactly sure what this means, but here's mine:

Maybe someone could explain it to me. Do I have to change my Lean now?
Click to expand...

Orange would be socialist, green liberal, purple libertarian, blue conservative and no moderates.
A

Mine same as you. 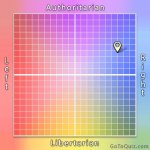 Your Compass:
You are a right social authoritarian
Right 6.91
Authoritarian 3.63
Foreign Policy -0.11
Culture 7.62

Seems sort of worthless. A tad left and slightly anti-authority. Looks like that test (no reason to think it has any merit) puts me basically middle-of-the-road.

The problem is that for most issues I am not middle of the road - but hard core. However, if 50% of the questions make me hard core left and half hard core right - same for authoritarian versus libertarian - I appear sort of a bland middle of the road person on everything - when those who know me on the forum recognize I tend to post very strongly worded and hardcore stances. Some would claim extreme positions.

The mistake is to stereotype me because on some topic I'm intensely pro-Trump or intensely anti-Democratic party. From this they try to assign my having the stance that FOX claims all Trump supporters have. Yet on other topics it will be in the opposite column.

Take environmentalism. I am very much NOT a supporter of the claimed climate change crisis. I don't think there is much humans can or will do about it - that is just really for government taxation and control. Thus, I seem anti-environment. But actually my greatest complaint against the climate change fixation is that it has distracted from the REAL environmental issues such as:
1. The poisoning of our oceans
2. The increasing filling the airways with us and all life constantly bombarded with various "waves" (ie types of radiation)
3. The vast growing amounts of chemicals in our food
4. The never ending population bomb in the poorest places on earth
5. The creation of artificial micro organisms - fungus, bacteria, virus
6. End nuclear power

My profession by choice is protecting mother nature. I spend hundreds of dollars a month feeding wild animals. Yet I oppose everything about "climate change" and the "green deal" - plus do not believe artificial economics for good causes works on a mass scale.

So am I anti environmentalism? Or an environmentalist? Questions in a poll would likely conclude I'm neutral on environmentalism - middle of the road - because by the test author's standards - my answers would split with hardcore diametric opposite responses. But, in fact, in both directions I'm rather hardcore. Hardcore for. Hardcore against. Why? I do not share the test creator's definition of true environmentalism.
Last edited: Jun 29, 2019

The MSM, press and simpletons create two opposed columns of diametric oppositions sides on the issues THEY say matter - and then all Democrats belong in one column and all Republicans in the other. Anyone who steps out of their column on everything is a disloyal betrayer to some, with that level of intolerance more on the side of the Democrats.

I'm pro-choice. Pro-SSM. Vehemently think Amazon and Google are massively illegal and destructive monopolies that should be busted up. But I oppose what I see as a radical "trans rights" agenda - strongly. I can go down the Democratic column and Republican column - and which side I'm on not only matters to the topic area - but even fine details within the topic area. Such tests can not account for that.

LGBT rights the best example. I have an SSM married adult child. I have always been pro-equality for gays. I think government should stay out of people's romances and even think the government shouldn't issue marriage licenses - what does marriage and personal relationships have to do with government? I've had gay rights activists meetings in our home.

I have spent large sums of money helping young gays in bad family situations and others. Bought a car, found housing and some cash for a young gay drag queen being thrown out by his family. A carload of young people we know personally very closely were at the Pulse nightclub the night of the mass murder and one of those was murdered.

So you'd think then on all things I'm hyper pro LGBT rights? Exception I furiously oppose people with male genitals in women's and girl's bathrooms and that assignment to sex segregated athletics absolutely should singularly be based on a person's sex based on their dna - with no exceptions, ever. So where would I fall on a test where LGBT rights are a measure? Pro? Or Con? I would fall in the middle - thus seen as not really particularly for or against LGBT issues. In fact, to the opposite on everyone of the issues I am hardcore. Rather, I'm not consistent with the stereotype pigeonholing.
Last edited: Jun 29, 2019

The problem isn't the test, it's that you're just a really weird person. I don't know how you exist, honestly. 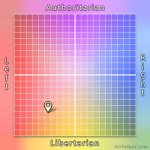 I don't think these tests are particularly accurate, but I don't necessarily disagree with the result.

nathanjames1791 said:
I find it interesting that Socialist people in this country are very against authority yet, they are socialist. Tell me that makes sense.....

You almost made it too that left the bottom corner. Keep trying!
Click to expand...

I know that I am bumping an ancient reply but I was scrolling through and I saw this question that I would like to answer if it doesn't offend anyone. Socialism is an economic concept of workers/citizens owning the means of production and services. It has nothing to do with either a civil libertarian or authoritarian form of the government, so you can have authoritarian socialism (Venezuala and Yugoslavia) or a civil libertarian social country/government. The people who tend to refer to themslves as progressives are both socialist on econmics and civil libertarian on civil rights.

As far left as Dem-Socialist is, my score is on lower in the horizontal axis but the very same vertical axis as theirs. To say that I am a liberal is an understatement because I am just outside of being an anarchist/left-libertarian or a communist in the Noam Chomsky and Peter Kropotkin concept.
C

You and I are very close politically. I'm one or two steps lower vertically.

Re: a different political compass quiz


mpg said:
I just did a few of these quizzes and most of them had too few questions. This one has a lot of questions and they're more political than the questions in that other quiz. It also rated me closer to how I see myself.

I must have had too much bourbon. Lol

Lisa said:
You and I are very close politically. I'm one or two steps lower vertically.
Click to expand...

Good to know I have at least one ally on here! Right-wingers seem to make up most of this forum's population.

capiz said:
Good to know I have at least one ally on here! Right-wingers seem to make up most of this forum's population.

I'm your generic lefty progressive. I'm a market socialist and a civil libertarian, bordering on left anarchy. You have likely read Kropotkin, Bakunin, and Proudhon.
C

Lisa said:
I'm your generic lefty progressive. I'm a market socialist and a civil libertarian, bordering on left anarchy. You have likely read Kropotkin, Bakunin, and Proudhon.
Click to expand...

We seem to be pretty well aligned then. I'm not quite as sure as you though, but I'm definitely some form of Libertarian Socialist.

You are a centrist moderate social libertarian.
Right: 0.2, Libertarian: 2.43

These are my results

You are a right moderate social libertarian.
Right: 5.69, Libertarian: 1.46 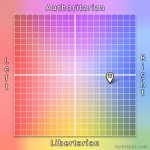 I believe you and I scored nearly exactly the same.

You are not a right-libertarian with that score. You are almost exactly on top of where Bernie Sanders scored. You need to score in the lower right quadrant to be a right libertarian.

Lisa said:
You are not a right-libertarian with that score. You are almost exactly on top of where Bernie Sanders scored. You need to score in the lower right quadrant to be a right libertarian.