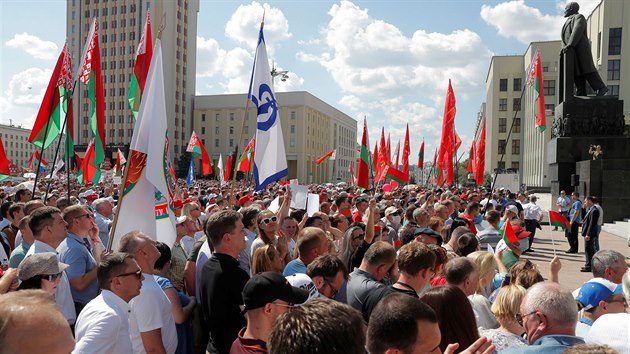 8/16/20
People are gathering in Minsk and other cities in Belarus in what organizers are hoping will be the biggest outpouring yet of opposition to the reelection of President Alyaksandr Lukashenka as pressure mounts on the authoritarian leader to step down after 26 years in power. Speaking to a gathering of supporters earlier on August 16 on Independence Square, Lukashenka claimed that NATO tanks and planes had been deployed 15 minutes from the Belarusian border and neighboring countries were ordering the country to hold new elections, something he said he refused to do. A NATO spokesperson later denied any troop buildup in Eastern Europe, as Lukashenka claimed. He addressed the crowd as the Kremlin said Russian President Vladimir Putin had told Lukashenka in a telephone call on August 16 that Russia was ready to provide aid under a military pact if need be, and claimed Belarus was facing unspecified external pressure. It was their second telephone conversation in as many days. As Lukashenka spoke, opposition supporters began marching in Minsk, chanting "Leave!" as they walked down Independence Avenue.

Lukashenka was declared the victor of the August 9 election in a landslide, with the main opposition challenger, Svyatlana Tsikhanouskaya, trailing far behind despite drawing huge crowds at campaign rallies across the country. Tsikhanouskaya, who has since fled to Lithuania, had called for peaceful protests across Belarus on August 15-16. The independent news site Tut.by reported that government workers and other state employees have been told to show up at their jobs or face being fired. Metal fencing around Independence Square was being installed early on August 16 with agricultural vehicles used to close off nearby roads. Some of the country's biggest state-run industrial plants have been hit by protests and walkouts in the past week. Meanwhile, thousands came out on August 15 to mourn the death of Alyaksandr Taraykouski who died in Minsk on August 10 during the post-election protests. Demonstrators heaped flowers at the spot and the crowd chanted "Thank you!" and raised victory signs. Police kept a low profile. Tsikhanouskaya said that she was initiating the creation of a “Coordination Council" for a potential transition of power. She’s also called on the international community to "help us in organizing a dialogue with Belarusian authorities.”
Click to expand...

I viewed the AP video of the Alyaksandr Taraykouski shooting. Police later claimed he had a bomb in his hands, but the video clearly shows his hands were empty when shot in the chest.