Navalny Had ‘Alarming’ Hypothermia in Russia 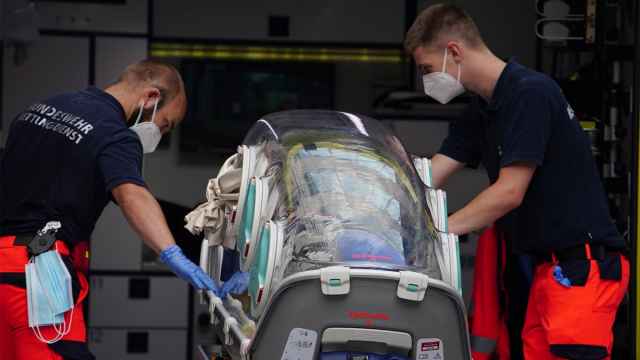 8/31/20
Prominent Kremlin critic Alexei Navalny had “alarming” hypothermia while he was undergoing treatment in Siberia, according to the NGO that organized his evacuation to Germany. Navalny, 44, a fierce critic of President Vladimir Putin and the de facto leader of Russia’s opposition, remains in a coma after falling suddenly ill on a flight to Moscow on Aug. 20. His supporters claim that Navalny was poisoned shortly before the flight. The Berlin-based Cinema for Peace Foundation told Russia’s state-run RIA Novosti news agency Sunday that German medics who arrived in the city of Omsk, where Navalny was first being treated, to plan his evacuation, observed hypothermia. Berlin’s Charité hospital said last week that Navalny was poisoned with an unidentified substance belonging to a group of chemicals that affect the nervous system. Doctors in Omsk had ruled out poisoning, diagnosing Navalny with a metabolic disease. In its latest statement Friday, Charité said Navalny’s symptoms have improved while his condition remains serious.“After a whole day of diplomatic efforts on every level and drafting our own medical report with an extremely alarming low temperature of 34.2 degrees [Celsius], we finally secured a decision to transport the patient at 22:00 local time Friday night,” the foundation said.
Click to expand...

Why is it that the German doctors successfully dealt with the Navalny hypothermia but the Russian doctors could not?