It's been a violent year for the Phoenix police dept. The officer shot is a 20 year veteran, a mom and wife.

PHOENIX - A Phoenix police officer was shot at a convenience store near Cave Creek and Beardsley Roads and the search for a suspect continues.


Police say the accused shooter's vehicle was located, but the suspect is still on the run.


Officers say they responded to a domestic violence call near 27th Avenue and Beardsley Road. At a convenience store, they said a woman called them, saying she went to the gas station to meet with officers and talk to them about the situation because she was too scared to meet at her home.


Soon after, officers say the suspect pulled up to the gas station, fired multiple rounds, striking one of them -- a veteran with over 20 years of service, a wife and mother.

The officer is in critical condition.

"Please keep the officer in your prayers," said officials with the Phoenix Law Enforcement Association.

"I've had eight officers shot and 13 injured during the four critical incidents that we've had in the last four months," said Chief Williams. 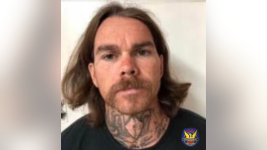 A mugshot released by Phoenix Police of a man they believe is involved in a shooting that left an officer seriously injured. (Courtesy: Phoenix Police Department)