Surveying thousands of stars for telltale twinkles that signal the passage of an orbiting planet, NASA’s Kepler spacecraft has discovered a whopping 706 candidate planets beyond the solar system. If confirmed, that motherlode would boost the number of known extrasolar planets, now estimated at 460, to well over a thousand.

The trove, announced June 15, includes evidence of five stars that have full-fledged planetary systems. These exoplanet systems, if verified, would be the first known in which each planet creates a minieclipse as it transits, or passes in front, of its parent star. The amount of dimming and the duration of a transit offer information about planets, including their size, that cannot be gleaned by less direct methods of detection.

A team including Kepler lead scientist William Borucki of NASA’s Ames Research Center in Moffett Field, Calif., has posted the findings online (at lanl.arxiv.org/abs/1006.2799 and at lanl.arxiv.org/abs/1006.2763) at arXiv.org. The discoveries were made by analyzing Kepler’s first few months of data, recorded in the spring of 2009 when the telescope examined 156,000 stars.

“This is a Massively Historic discovery,” says study coauthor Sara Seager, a theorist at MIT. “This is showing how the Kepler mission will revolutionize exoplanets and change the way we do exoplanet science.”
[..........]
Click to expand... 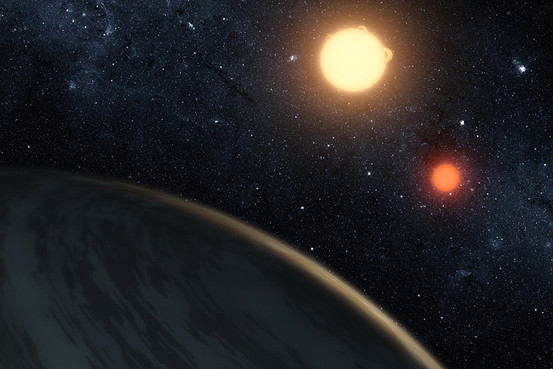 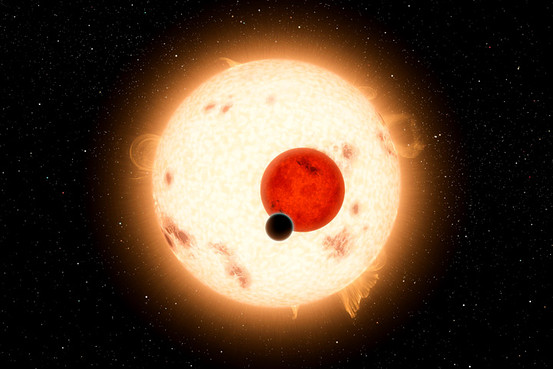 Astronomers announced Thursday the discovery of a rare planet that orbits two stars, like Tatooine in the "Star Wars" films, adding to a growing inventory of alien worlds in the curiosity shop of the cosmos. Detected by the National Aeronautics and Space Administration's $600 million Kepler space telescope, it is the first confirmed solar system of its kind, turning a Hollywood fantasy into an astronomical fact. Called Kepler-16b, the Saturn-size planet circles its twin stars in the constellation Cygnus about every 229 days, the researchers reported in Science.
"Just about anything you could think of as a planetary system is actually out there," said astrophysicist Fred Rasio at Northwestern University, who wasn't involved in the work.

200 light-years from Earth, Kepler-16b is a planet washed in red and orange shadows, tinged by the colored light of its two small shifting stars, and colder than a winter midnight in Antarctica, with temperatures hovering around minus 150 degrees Fahrenheit. No two sunsets or sunrises are ever quite the same, due to the system's complex orbital dynamics. "Again and again, we see that the science is stranger and cooler than fiction," said John Knoll, at Lucasfilm Ltd.'s Industrial Light & Magic in San Francisco, who was the visual effects supervisor on three "Star Wars" films.

The discovery capped a week of new findings about worlds beyond our own solar system. All told, four research teams in Europe and the U.S. reported finding 74 previously unknown exoplanets, as worlds orbiting other stars are called, including 16 that appear to be only slightly larger than Earth and with gravity favorable to life as we know it. One of them, with about 3.5 times Earth's mass, may be orbiting near its parent star's so-called habitable zone, in which water may be liquid and conditions possibly ripe for life, said astronomers at the European Southern Observatory, who announced the find earlier this week. It was among a trove of 50 exoplanets they detected around nearby stars using a spectrograph called the High Accuracy Radial-velocity Planet Searcher (HARPS), which is based at the La Silla Observatory in Chile.
The HARPS team, led by Michel Mayor from the University of Geneva in Switzerland, estimated that about 40% of all stars like the Sun have at least one planet of Saturn's size or smaller.

So far, the Kepler mission scientists have found more than 170 star systems in which two, three, four, five or even six planets all orbit one star. "The universe is Teeming with planetary systems of multiple planets, many of which are nearly the size of Earth," said plant-hunting pioneer Geoffrey Marcy at the University of California in Berkeley. So far, for reasons ranging from toxicity to temperature extremes, none of the 683 confirmed exoplanets seem capable of harboring life. No one can say with certainty whether any habitable planets exist outside our solar system.

Even so, the cascade of finds offers growing evidence that alien worlds may outnumber the stars themselves.
[...........]
Click to expand...