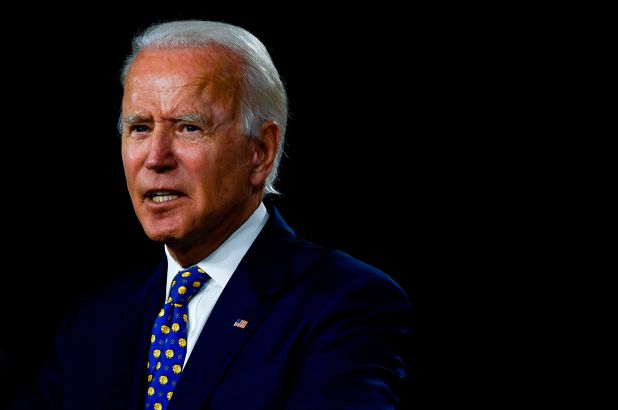 9/14/20
Joe Biden's presidential campaign grew more diverse in its staffing over the summer months with people of color now making up nearly half of the campaign's full-time staff and women on the campaign growing in their majority. Forty-six percent of Biden's full-time staff are people of color, up from 35% percent when the campaign first reported its diversity data in June, according to new figures provided to CNN by a Biden campaign official. Forty percent of senior staffers are people of color, up from 36% ten weeks ago. The number of women on the campaign also grew with 59% of full-time staff identifying as female, up from 53% in June. Five percent of staff chose not to specify race. The campaign did not provide a full staffing breakdown based on race and ethnicity. The new figures are reflective of 622 full-time Biden campaign staff, a campaign official said. "The Vice President is committed to building a campaign team that reflects America. The growth in our diversity numbers reflects that commitment and is another great example of the Vice President demonstrating his values through his actions," said Michael Leach, chief people diversity and inclusion officer for the Biden campaign.

Biden has pledged, if elected, to build an administration that reflects the diversity of the country, including in his staff, cabinet and other government officials. "My administration's going to look like America, not just my staff, the administration from the vice president straight down through Cabinet members to major players within the White House, and the court," Biden said during a June town-hall focusing on issues tied to the Asian American and Pacific Islander communities. "It's going to be a reflection of who we are as a nation." The Trump campaign last released its diversity data in June when a spokesperson said 52% of full-time staff were women and senior staff was comprised of 56% women and 25% people of color. At the time, the campaign did not provide a breakdown of people of color on the full-time staff.
Click to expand...

Biden's ethnic and racially diversified campaign staff is a refreshing change from Trumps Lilly-white campaign which mirrors his affinity for the white-supremacist movement.
B

Rogue Valley said:
Joe Biden campaign grows more diverse with people of color making up nearly half of staff
...
Biden's ethnic and racially diversified campaign staff is a refreshing change from Trumps Lilly-white campaign which mirrors his affinity for the white-supremacist movement.
Click to expand...

Is that gonna make up for his brain malfunctions?!?
B

I find it interesting that in 2020 people are still making an issue of the makeup of campaign staff. All it does is continue to promote unrest. For me I don't care what color the person is if they are qualified to do the job. Start treating people for their character and actions.

Do the same people look at sport teams the same way as a campaign staff? Do they look at their own work environment and say there are too many (pick a race)?

Let the crass comments from the Trump supporters begin. :mrgreen:

Biden is just following President Trump's lead in that area.

At least Joe doesn't read his speeches in a monotone and without emotion. :mrgreen:

Oooo....good counterpoint! The debate is strong in this post!
B

That's not an unusual statement from people who have travel to many locations in a short period of time. Especially from those who think out loud, like Biden. When I would travel to numerous locations over a short period of time, I would at times think the same thing and look it up or ask so of whom I might be traveling with. It's not unusual. Unlike Melania did with Trump, at least Jill didn't reject Joe's hand and ignore him.
You must log in or register to reply here.
Share:
Facebook Twitter Reddit WhatsApp Share Link
Top Bottom