FANTASTIC:
It turns out that Democrats destroyed the entire health care system to insure, like, 3 extra people​ 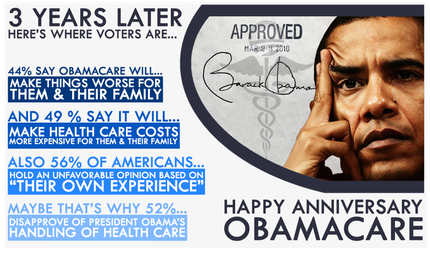 ““If you’re one of the 30 million Americans who don’t yet have health insurance, starting in 2014, this law will offer you an array of quality, affordable, private health insurance plans to choose from.” –Barack Obama, 28 June 2012

The CBO has done another assessment of Obamacare: it finds that ClusterCare will leave, uhm, 30 million people uninsured:


A new Congressional Budget Office (CBO) report says that under the Affordable Care Act, a.k.a. Obamacare, 30 million non-elderly Americans will remain without health insurance in 2022.

One of the main arguments the Obama administration made for passing the Affordable Care Act was that it would provide coverage for the uninsured.

…Under Obamacare, 8 percent of legal U.S. residents will remain without health insurance in 2022, according to CBO… The report was done to assess the fiscal impact of the Supreme Court June Obamacare decision.

“CBO and JCT [Joint Committee on Taxation] now estimate that the ACA, in comparison with prior law before the enactment of the ACA, will reduce the number of nonelderly people without health insurance coverage by 14 million in 2014 and by 29 million or 30 million in the latter part of the coming decade, leaving 30 million nonelderly residents uninsured by the end of the period,” the report said.

How come there Will Still Be 30 million nonelderly American people without Health Insurance?