Is there a tools revolution and will it mean the 'democratization of manufacturing'?

I came across this article on something called the 'Maker Movement'. I'd never heard of it before now, and the author argues that its type of technological evolution is a major economic revolution in the making.

Everyone in journalism knows the line attributed to A.J. Liebling, in The New Yorker: “Freedom of the press is guaranteed only to those who own one.” Liebling wrote that in 1960. As more-or-less recently as that in historical terms, if you wanted to disseminate your thoughts to people outside your household, you simply could not do it yourself. You had no option but to work through a limited number of powerful, capital-intensive enterprises. You had to convince a newspaper or magazine to publish your writings—because only they controlled the printing presses, delivery networks, and newsstands. [...] And the people who served as middlemen—the publishers, the broadcasters—were buttressed by the very expensive printing and transmitting equipment they controlled.

Something similar is fostering the maker movement. Since the dawn of the capitalist heavy-industrial era, to succeed in manufacturing you needed capital. You needed money for giant production equipment. Blast furnaces if you were making steel, assembly lines if you were making cars, machine tools if you were making engines, coordinated supply chains if you were assembling complex devices. Then you needed distribution arrangements with stores, and lots of inventory for them to keep in the warehouse, and other impediments that collectively made it hard, expensive, high-stakes, and high-risk for newcomers to enter a business.

This is the equation that the tools revolution of the past few years is also changing for manufacturing. A combination of 3D printing (which allows people to make and revise prototypes onsite, and produce certain high-value, low-volume items themselves, rather than going to a factory); much less expensive laser cutters, milling machines, and other sophisticated machine tools; the evolution of Arduino controls, which allow designers to add sophisticated electronic functions without doing all the coding themselves.
Click to expand...

Why the Maker Movement Matters: Part 1, the Tools Revolution

Institute for the Future: Maker Cities


This makes some vague sort of sense to me especially when compared to publishing: more and more people are gaining more access to the tools needed for entrepreneurial development. There are two things that make me question the article's conclusions though. One, it doesn't have the same diffusive power because not everyone has the sort of skills one needs to utilize this new socio-technological capacity for indie manufacturing in the same way that everyone with an internet connection knew, more or less, how to write, or use photoshop. Secondly, the media revolution brought on by the internet was successful largely because it was location-independent. Manufacturing even of this new sort is obviously still very much location-dependent, and that won't change easily.

It's apparent that the author thinks this is a significant movement in economic history anyway, and I suppose it could be even with those limitations, but those limitations imply that the revolutionary potential is dependent on simultaneous education and knowledge economy growth and either logistical growth (which is plausible in the long term, especially if delivery UAVs go long-range) or if the Maker City style workshops open in exponentially more and more cities, which I think is slightly less plausible but not impossible.


gavinfielder said:
From the Atlantic Article: Sure, low wages and lax-to-nonexistent regulatory and environmental standards were big advantages. But it was mainly the speed of the industrial ecosystem in places like Shenzhen that was so amazing. And the density of all elements of the supply chain — if you needed a certain kind of keyboard or connector, there were five suppliers to choose from within an hour’s drive.
Click to expand...

Let's not forget that the Bamboo Curtain came crashing down in 1991, that's three and a half decades ago. Now we have Chinese millionaires buying top-market housing in Vancouver (like there was no tomorrow).

What's happening? Word goes that these residences are the "back door" in case the Chinese government comes tumbling down. Others think that the great boom has to start leaking steam at some point.

I am of the latter opinion. The Chinese took semi-skilled manufacturing jobs away from Europe and the US. That same phenomenon is now happening to China, by India, Thailand, Vietnam, the Philippines. (Not to mention that China is investing heavily in African agriculture because it does not have the means - arable land - sufficient to feed its own population.)

So, before we get carried away with the China Threat, let's remember there was precursor country that carried out almost the same phenomenon in the 18th century, which was the US.

There is indeed, in this New Millennium, a confluence of events that is altering definitively global manufacturing patterns. This article mentions a few, like 3D-manufacturing. Which is the sort of technology that any country can buy nowadays. So, let's look at that evolution not as a threat but an opportunity.

Over the past half century, accelerated since 1991, America has become less a Manufacturing Capital of the world than a Services Capital. More than two-thirds of our GDP comes from the Services Sector. That trend is unlikely to change. What we must therefore be concerned about is twofold:
*That we produce enough (Manufacturing & Services) to be bought from the world as we buy from the world.
*That we are preparing this evolution badly by shutting out some from obtaining the services-skills necessary to assure access to higher level jobs.

The Chinese have become a strong contender as regards the deposition of Intellectual Property ownership. They are graduating their young with Tertiary Level degrees - free, gratis and for nothing. And they are not the only ones. We seem to be the only nation on earth where a Postsecondary Education becomes beyond the reach of those who need it most.

If we do not confront that fact, then we, as a nation, will fail the challenge that is posed. To enhance our workforce to a generally higher skills-set level.

Or the decline to secondary world-status as an economy will be our future. Do we really want America to be an "also ran" country?

We must all answer that question ...

There is a great deal of talk nowadays about a Universal Income, particularly amongst those of the Left and Center-Left. Certainly, in a country where 15% of the population finds itself below that threshold, there is a good argument for it.

More than likely, in the US, it could perhaps reduce drastically the urge for thieving thus reducing the incarcerated population for which Uncle Sam is wearing the winner's crown; 689 per 100K of population See map: 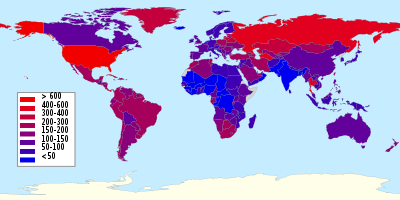 However, not all are prepared to see this happen. Switzerland recently rejected a referendum proposing a Universal Income by 77% of the population. But, then, Switzerland has only 7.6% of its population living below the Poverty Line - half that of the US.

The question is presently worth considering noentheless; for the simple reason that advances of technology-usage in manufacturing, construction and even the services is advancing considerably. Thus putting pressure on countries to rethink a possible Universal Income since good-jobs are moving upscale in terms of skill/competency levels required...
You must log in or register to reply here.
Share:
Facebook Twitter Reddit WhatsApp Share Link
Top Bottom