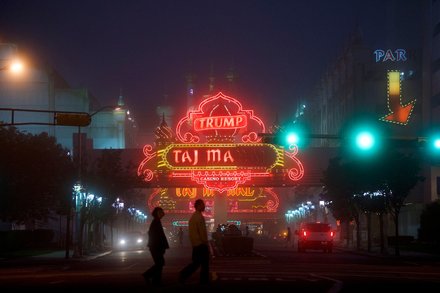 During a decade when other Atlantic City casinos thrived, Donald J. Trump's lagged


On the presidential campaign trail, Mr. Trump, the presumptive Republican nominee, often boasts of his success in Atlantic City, of how he outwitted the Wall Street firms that financed his casinos and rode the value of his name to riches. A central argument of his candidacy is that he would bring the same business prowess to the Oval Office, doing for America what he did for his companies. “Atlantic City fueled a lot of growth for me,” Mr. Trump said in an interview in May, summing up his 25-year history here. “The money I took out of there was incredible.”

His audacious personality and opulent properties brought attention — and countless players — to Atlantic City as it sought to overtake Las Vegas as the country’s gambling capital. But a close examination of regulatory reviews, court records and security filings by The New York Times leaves little doubt that Mr. Trump’s casino business was a protracted failure. Though he now says his casinos were overtaken by the same tidal wave that eventually slammed this seaside city’s gambling industry, in reality he was failing in Atlantic City long before Atlantic City itself was failing.

But even as his companies did poorly, Mr. Trump did well. He put up little of his own money, shifted personal debts to the casinos and collected millions of dollars in salary, bonuses and other payments. The burden of his failures fell on investors and others who had bet on his business acumen. In three interviews with The Times since late April, Mr. Trump acknowledged in general terms that high debt and lagging revenues had plagued his casinos. He did not recall details about some issues, but did not question The Times’s findings. He repeatedly emphasized that what really mattered about his time in Atlantic City was that he had made a lot of money there. Mr. Trump assembled his casino empire by borrowing money at such high interest rates — after telling regulators he would not — that the businesses had almost no chance to succeed.
Click to expand...

The short version ... Trump lied to regulators and investors in order to enrich himself before his Atlantic City charade wound up in bankruptcy courts.

I can't stand Trump. I want to see him lose and lose badly, just so he goes away.

But right out of the gate this article was dishonest:

The Trump Plaza Casino and Hotel is now closed, its windows clouded over by sea salt. Only a faint outline of the gold letters spelling out T-R-U-M-P remains visible on the exterior of what was once this city’s premier casino.

As someone who has been going to Atlantic City since the early 1980s, who grew up not far from there, who knows many people who worked and still work there, I can assure you that nobody, ever, ever felt the Trump Plaza was once the "city's premier casino". Ever. It was small from the get go, and it lost money virtually from its opening date in the mid-1980s. Also, it was a Harrah's property, run by Harrah's, and the Harrah's name was only removed because people confused it with Harrah's at the Marina. Trump dumped a ton of money into that casino and it was always a dog.
You must log in or register to reply here.
Share:
Facebook Twitter Reddit WhatsApp Share Link
Top Bottom