Have your political views changed over time?

I used to be pro-immigration, pro-diversity, pro-amnesty and anti-death penalty. 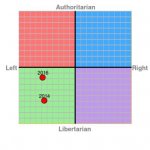 Land by the Gulf Stream

I'm center-left now, but I was more to the left when I was younger.
T

my understanding of issues has changed, but not my politics... I've always been of the mind that the government shouldn't be in the business of being our mommy ....or daddy.

I've moved more to the right and a little more libertarian.

I've never strayed from a more libertarian mindset though; that has stuck with me for as long as I can remember. Then again, being 17, I haven't lived very long.

I am right authoritarian and I probably always will be more centered but I have no proof of previous years. However every time I have taken that test I winded up somewhere in the blue square.

Luftwaffe said:
I've moved more to the right and a little more libertarian.

I've never strayed from a more libertarian mindset though; that has stuck with me for as long as I can remember. Then again, being 17, I haven't lived very long.
Click to expand...

was gonna say you'll grow out of, but then remembered who it is

none of my thoughts changed because they have never been illogical

Quite a bit so, I didn't have political opinions at all until 9/11 which was my Senior year of HS. Back then I was socially liberal with no conception of fiscal concerns and believed things like "Communism would work perfectly, but humans are too evil to practice it."

Going to college I was exposed to more rural Americans and conservative values, I also met some "libertarians" who were basically socially liberal conservatives who thought libertarianism meant ending the drug war. This appealed to me, until I was exposed to Ayn Rand. I then became "That guy." You know that guy, some of you may currently be that guy. While not having changed on many positions, I have in my recent years begun to view political matters between two particular lenses:

1. NAP: My entire political inclination has always been based on a desire to simply be left alone. I'm not bothering anyone, just leave me alone with my toys. Basically my political litmus test is the non-aggression principle. Force is only justified in self defense. If its wrong for me to do something and its wrong for me to have someone do it on my behalf, then I don't want the government doing it. I don't care how good of an idea it is, If I'm not willing to send men with guns to compel compliance then I don't want it to be law.

2. R vs K Selection Theory. This one would take ages to describe, I would recommend watching Stefan Molyneux's series on the subject. But in short, things like being raised by a single mother in the absence of a father have statistically proven worse lifetime success and have been scientifically proven to cause at an epigenetic level earlier onset of puberty, which coincides with earlier loss of virginity and a greater likelihood of a repeat of the cycle of a single mother. Those who rob from Peter to pay Paul will always have Paul's support, you can count on the votes of these shall we call them "R-Selected Types" to vote in favor of welfare benefits that perpetuate the government pinch hitting for a paternal provider. They will always vote for those who will make the world easier for R-selected type reproduction.

This, along with apathy for illegal immigration (low in-group preference) who will exacerbate the welfare situation, the availability of abortion (which I do not oppose) and all other political stances which promote R-Type genetics amounts to a genetic war against the K-selected types. When you delve down the rabbit hole of the biology of it and then the political implications, you can't help but think about it every time you go "Really, that's your position on Insert_Political_Subject? I could have never guessed... :roll:"

TLDR: So since my Atlas Shrugged thumping days, I no longer view liberals/progressives/collectivists/communists/socialists as "looters" for their desire for any forced redistribution of wealth. I just see incentives, interests and nature at work. The K's need the R's else life would be dull and stagnant, the R's need the K's to keep them from "progressing" off a damn cliff since some of the values that got you this far and this strong should be "conserved."
Last edited: May 3, 2016
You must log in or register to reply here.
Share:
Facebook Twitter Reddit WhatsApp Share Link
Top Bottom