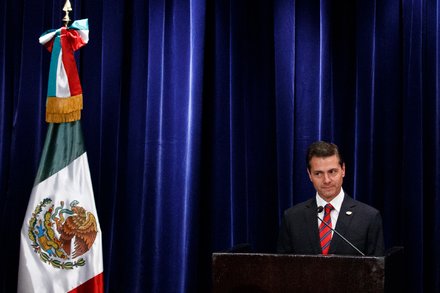 1/15/19
The former president of Mexico, Enrique Peña Nieto, took a $100 million bribe from Joaquín Guzmán Loera, the infamous crime lord known as El Chapo, according to a witness at Mr. Guzman’s trial. The stunning testimony was delivered Tuesday in a New York courtroom by Alex Cifuentes Villa, a Colombian drug lord who worked closely with Mr. Guzmán from 2007 to 2013, when the kingpin was hiding from the law at a series of remote ranches in the Sierra Madre mountains. “Mr. Guzmán paid a bribe of $100 million to President Peña Nieto?” Jeffrey Lichtman, one of Mr. Guzmán’s lawyers, asked Mr. Cifuentes during cross-examination. Mr. Guzmán’s testimony would be a stunning development. While his lieutenants have shared details about the Sinaloa cartel’s operations, the kingpin himself could offer even more intimate information, such as how he possibly bribed a president of Mexico. According to Mr. Cifuentes, Mr. Peña Nieto first reached out to Mr. Guzmán about the time he was elected president in late 2012, asking the drug lord for $250 million in exchange for calling off a nationwide manhunt for him. But Mr. Guzmán made a counteroffer, Mr. Cifuentes added, saying he would give Mr. Peña Nieto only $100 million.“Yes,” Mr. Cifuentes said.

After testifying about the two presidents, Mr. Cifuentes rattled off other bribes that Mr. Guzmán and his allies had paid to Mexican officials. On at least two occasions, he said, the kingpin gave the Mexican military between $10 million and $12 million to launch operations to “either kill or capture” associates of the Beltrán-Leyva brothers during his war with them. Mr. Cifuentes also said the Mexican federal police not only turned a blind eye to drug trafficking, but occasionally took part in it. Once, he told jurors, traffickers gave the police photographs of several suitcases packed with cocaine that were sent by the cartel on an airplane from Argentina to Mexico. The police picked up the suitcases from the baggage claim, Mr. Cifuentes said, and sold the drugs themselves.
Click to expand...

If true, the degree of corruption in Mexico's political, military, and LEO organizations, while not unexpected, is astounding.