Steve Reglar said:
As a tool of capitalist hegemony the doctrine of general equilibrium is very useful. It assumes that the normal condition of society is for the state to play as little a role in economic life as possible, because the market is part of human nature and the most efficient form of economic organization. The theory, therefore, has a role in legitimizing capitalist hegemony.
Click to expand...

A tool of capitalist hegemony? My, what harsh language! One can almost visualize GE theorists visiting smoke-filled rooms to accept bribes from their cigar-puffing benefactors. Indeed, Post-Autistic economists, after observing the word "axiomatic" in the title of my book (Aguilar, 1999), dismissed it out-of-hand, denouncing me as a bought-and-paid-for stooge of Big Business. Apparently, just that one word was enough to convince them of this about me.

But before we dismiss this talk of an epistemological approach being a "tool" of Big Business to "legitimize" their obviously anti-social behavior, let us at least see if the socialists are consistent. James Yunker (2007) writes:


James Yunker said:
This article evaluates the performance of contemporary capitalism relative to that of a hypothetical alternative designated "profit-oriented market socialism." In most respects, profit-oriented market socialism would closely mimic contemporary market capitalism. The major difference would be that most profits and interest generated by the operations of publicly-owned business enterprises would be distributed to the general public as a social dividend proportional to household wage and salary income rather than in proportion to household financial assets. The basis of the comparison is a small-scale but comprehensive computable general equilibrium model.
Click to expand...

Here we read that GE Theory is not a tool of capitalist hegemony, but a tool of profit-oriented market socialism, that is, publicly-owned business enterprises (e.g. Fannie, Freddie, AIG, etc.) that mimic contemporary market capitalism. And it is not a "tool" in the sense of legitimizing the socialists (presumably, their legitimacy is derived from emotional appeals of the "Gosh, there sure are a lot of poor people – darn capitalists!" variety), but a tool in the literal sense of defining a software model.

Well, which is it? Reglar thinks that GE Theory "assumes that the normal condition of society is for the state to play as little a role in economic life as possible." Yunker sees GE Theory as the basis for a central planner to "mimic contemporary market capitalism" while retaining for himself the authority to distribute the social dividend – hardly a "little role in economic life."

The primary (actually, the only) criticism that socialists have of my writing is that it lacks "substantial references." Apparently, he whose writing is filled with the most quotations from the most august of academic journals wins. Thus, having observed that Reglar and Yunker have opposite views of GE Theory, we clearly need a tie-breaker. Cristobal Young (2005) writes:


Cristobal Young said:
General equilibrium theory – the mathematical analysis of a market economy as a whole – has its roots in the late 19th century works of Leon Walras and Vilfredo Pareto… However, the project failed to attract much following and soon faded into dormancy.

It was the end of the Great Depression, ironically, that saw a tremendous revival of the General Equilibrium (GE)/Welfare economics project. In the US, a loose grouping of devout socialists were busy detailing the elegance of the market equilibrium. The leaders of the GE revival – Oskar Lange, Abba Lerner and Abram Bergson – were cutting-edge mathematical economists and true believers in Soviet-style central planning…

For an economic system that failed to satisfy such assumptions, there seemed a need for government intervention. General equilibrium theory provided a sort of checklist for market critics.
Click to expand...

Young supports Yunker’s position though, while they agree that central planning is the inevitable result of economists' acceptance of GE Theory, Young see this as a bad thing and Yunker sees it as a good thing. Nevertheless, the Review of Political Economy and the SSRN trumps an obscure conference of socialists idling on the taxpayer’s dime, drinking tea and refining their plans for world conquest. Two out of three quotations wins!

Steve Keen (2007, p. 173) has also observed that satisfying the ever-growing list of assumptions made by Debreu and his followers is "unrealistic":


Steve Keen said:
It is almost superfluous to describe the core assumptions of Debreu’s model as unrealistic: a single point in time at which all production and exchange for all time is determined; a set of commodities – including those which will be produced in the distant future – which is known to all consumers; producers who know all the inputs that will ever be needed to produce their commodities; even a vision of "uncertainty" in which the possible states of the future are already known, so that certainty and uncertainty are formally identical. Yet even with these breathtaking dismissals of essential elements of the real world, Debreu’s model was rapidly shown to need additional restrictive assumptions.
Click to expand...

In the context of GE Theory, the conditions required for capitalism to be efficient are implausible in practice, though conceivable in theory. The former implies that the free market is always inefficient. The latter implies that a central planner can mimic how capitalism would work if it were efficient while the "profits and interest generated by the operations of publicly-owned business enterprises would be distributed to the general public as a social dividend."

In the context of GE Theory, there is no way for libertarians to get around this dilemma without being impaled on one or the other horn. Either we live with a system that can never be efficient in practice or we have an efficient system but renounce private property rights and put distribution of the "social dividend" in the hands of a central planner.

Far from being a "tool of capitalist hegemony," acceptance of GE Theory is the death of capitalism. Our only compensation is that, like a condemned prisoner who gets to choose the firing squad or the hangman, we get to choose inefficiency or tyranny. How did free-market economists respond to this dreadful choice? Milton Friedman invoked his famous "assumptions don’t matter" dictum (1953) to avoid having to admit that he could not untie the Gordian knot of GE Theory – but that is cowardice. Surely there must be a better way!

Instead of attempting to untie it, I cut the Gordian knot of GE Theory by throwing all of Walras’ and Pareto’s assumptions overboard and starting from scratch with my own set of axioms. When faced with a dilemma "in the context of GE Theory," I invented Axiomatic Economics. As Hannibal Barca said, "we will either find a way, or make one." The same goes for libertarians; we will never accept socialism.

My assumptions are three:

2) Marginal (diminishing) utility, u(s), is such that:

i) It is independent of first-unit demand.

iii) The integral of u(s) from zero to infinity is finite.

i) Value changes each day by a proportion (called 1+εj, with j denoting the day), of the previous day's value.

ii) In the long run, the εj's may be considered random as they are not directly related to each other nor are they uniquely a function of value.

iii) The εj's are taken from an unspecified distribution with a finite mean and a non-zero, finite variance.

Read my Simplified Exposition of Axiomatic Economics for a more detailed, but still undergraduate-level discussion of my economic theory. This paper requires knowledge of multi-variable calculus but omits the real analysis that plagues readers of my 1999 book.

Umm yeah this is a bit over my head, but it gives me something to read up on. So GE is general equilibrium?

OKay I have done my reading on this

General Equilibrium is something coined in the 18th century and thought to be practiced today by social programs, or what right wingers call in a blanket statement "socialists".

It makes the assumption that if you think the government can help alleviate a pure market economy, you are a GE theorist. Kind of like if you believe in social programs you are a socialist. It paints a broad brush over something that should be taken policy by policy.

Also are you Victor Aguilar? Anytime I look up anything on this subject that name comes about.

OKay I am going to be commenting on this a lot as I delve into this, since axiomatic econ is your theory, and I have yet to see anything about this, but congratulations you are heterodox just like me .

Now the term axiomatic refers to something being self evident, so you base the entire economic theory on an assumption, that the creation of wealth is all that matters?

As I read your paper this bit jumps out as the first thing to address:

"However, by defining economics to be concerned with the
creation of wealth rather than the allocation of scarce resources, I have
not only solidified it but have shifted its basic paradigm. I address the
issue of price and stock. Supply and demand does not work. This is a
fundamental departure from mainstream economics comparable to that
of Copernicus in astronomy."

Here is where that breaks down very easily. In this mode of only measuring wealth we only measure an outcome in it's totality, we don't measure how we get there. There are moral implications to this, and just getting more wealthy shouldn't be the main measurement in any economic theory.
O

JP Hochbaum said:
Now the term axiomatic refers to something being self evident, so you base the entire economic theory on an assumption, that the creation of wealth is all that matters?

There are moral implications to this, and just getting more wealthy shouldn't be the main measurement in any economic theory.
Click to expand...

My theory is amoral. Everybody has a value scale and whatever they assign value to is, by definition, wealth.

I'm a mathematician and the equations I've derived apply as well to a tree hugger amassing carbon credits as to a serial killer collecting severed heads - whatever turns you on.

It is not amoral. Your morals are your set of values, you value wealth in your economic theory, therefore your morals are biased towards wealth accumulation. Not saying that is wrong, just saying it isn't amoral.

You also show a conservative bias in your paper:

"" The act of creating new capital, manufacturing new machines, is called investment. A government has two methods to pay for its consumption: It can tax people or it can sell bonds."

This is a false choice.

Relying to much on wealth takes out the human effect and that is reality. Economics must also consider effects on people, otherwise we could use math to essentially die everyone off and we are left with no economy. You can't have economics that is completely void of social effects.

JP Hochbaum said:
Your morals are your set of values, you value wealth in your economic theory, therefore your morals are biased towards wealth accumulation.
Click to expand... 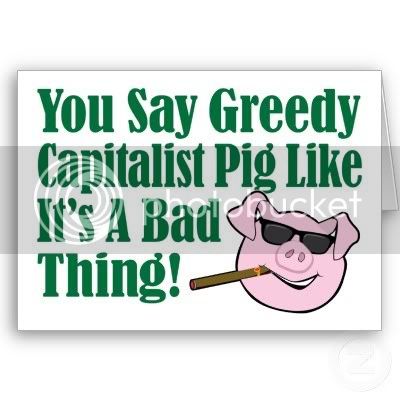 I have no issues with capitalism