I was forwarded this e-mail recently. There are some links in it provided as sources. Let me know what you guys think. Any information proving or disproving it? It's quoted below.

This could be a scandal of epic proportions, and one that makes Nixon's

The question is: Why was there neither rhyme nor reason as to which dealerships of the Chrysler Corporation were to be closed?

Answer: Roll the clock back to the weeks just before Chrysler declared bankruptcy. Chrysler, like GM, was in dire financial straits, and the federal government "graciously" offered to "buy the company" keep them out of bankruptcy, and "save jobs." (oh, sure!)


Chrysler was, in the words of Obama and his administration, "Too big to fail," same story with GM.

The feds organized their "Automotive Task Force" to fix Chrysler and GM.

Obama, in an act that is 100% unconstitutional, appointed a guy named Steve Rattner to be the White House's official Car Czar - literally, that's what his title is. Rattner then became the liaison between Obama, Chrysler, and GM.


Initially, the national media reported Chrysler made this list of dealerships out. Not true!


The Washington Examiner, Newsmax, Fox New, and a host of other news agencies

Force" headed by no one other than Mr. Steve Rattner.


Remember earlier, we said there was neither rhyme nor reason to why certain

Actually, there was an interesting pattern as to who was closed down, or who was left open with millions of tax-payer dollars.


Amazingly, of the 789 dealerships closed by the federal government, 788

had donated money, exclusively to Republican political causes, while contributing nothing to Democratic political causes. The only "Democratic" dealership on the list was found to have donated $7,700 to Hillary's campaign, and a bit over $2,000 to John Edwards. This same dealership, reportedly, also gave $200.00 to Obama's campaign.

Does that seem a little odd to you?

Steve Rattner is the guy who put the list together, and he just happens to be married to Liberal Queen,Maureen White who just happens to be the former national finance chairman of the Democratic National Committee. As such, she has access to campaign donation records from everyone in the nation- Republican or Democrat. But of course, this isjust a "wacky coincidence," right?


Then comes another really "wacky coincidence."

being closed, a weird thing happened in Arkansas , North Louisiana , and

of Staff, Mack McClarty, owns a chain of dealership in that region, partnered

with a fellow by the name of Robert Johnson who happens to be founder of Black Entertainment Television, and

was a huge Obama supporter, and financier.

RLJ-McClarty-Landers. Interestingly, none of their dealerships

were ordered closed - not one!

But all of their competing Chrysler/Dodge, and Jeep dealership were! Eight dealerships located near the dealerships owned by McClarty and Johnson were ordered shut down.


Thus by pure luck, these two major Obama supporters now have a virtual

monopoly on Chrysler sales in their area. Isn't that amazing?

Go look in The Washington Examiner, the story's there, and it's in a dozen

or so other web-based news organizations; these FACTS are not made up.


And if you thought Chrysler was owned by Fiat, you are mistaken. Under

the federal court ruling, 65% of Chrysler is now owned by the federal

government, and the United Auto Workers Union! Fiat owns only 20%.

The other 15% is still privately owned, and presumably will be traded

on the stock market. Obama smiles, and says he doesn't want to run the auto industry. Really?

As horrifying as this is to comprehend, and being as how this used to

be the United States of America , it would appear the president has the

power to destroy private businesses, and eliminate upwards of 100,000 jobs

because they don't agree with his political agenda.

This is Nazi Germany stuff, and it's happening right here, right now, in our country.


There are voices in Washington demanding an explanation, but the "Automotive Task Force" has released no information to the public, or to any of the senators demanding answers for what has been done.

Keep your ear to the ground for more on this story. If you've ever wanted to

make a difference about anything in your life, get on the phone to your

national senator or representative in the House, and demand an investigation into this.


An amazing thing happened as this story was going to press. Obama's Car Czar,

Steve Rattner, resigned on July 13 and was promptly replaced by former

According to CBS News, Rattner left to return to private life, and spend time with family.

to bring his unique skills to government service in the future." (Oh, so do we tax-payers!)


By the way, Rattner is under investigation for a multi-million dollar pay-to-play investment bank scandal in New York ....Surprised?

But, we're certain that had nothing to do with his resignation.....

And, according to several news sources, there are rumors he's being

Chrysler and GM dealerships. Again, that couldn't have anything to with his resignation-that's ridiculous according to CBS!!! They said, "this guy just wants to spend more quality time with his family."

him, all of whom are acting without any Constitutional rights or authority being followed.

SOOOOO.......HOW'S THAT CHANGE WORKING FOR YOU?


Check it out at the following websites.....


This goes beyond corruption in

high places - to gross criminal actions on the part of our government!

I hope you will spread this far and wide, and hopefully the taxpaying

public will demand some of that transparency we were

promised......followed by criminal prosecution of the perpetrators!

Benjamin Franklin had it right when he said, "All that's necessary for evil to triumph is for good men to do nothing."
Click to expand...

Location
In your dreams...

One of the links is brokenated.

SE102 said:
One of the links is brokenated.
Click to expand...


Thanks for the heads-up it must have been taken down. I'll leave it to keep the original e-mail intact.

Rightwingnutjob said:
Thanks for the heads-up it must have been taken down. I'll leave it to keep the original e-mail intact.
Click to expand... 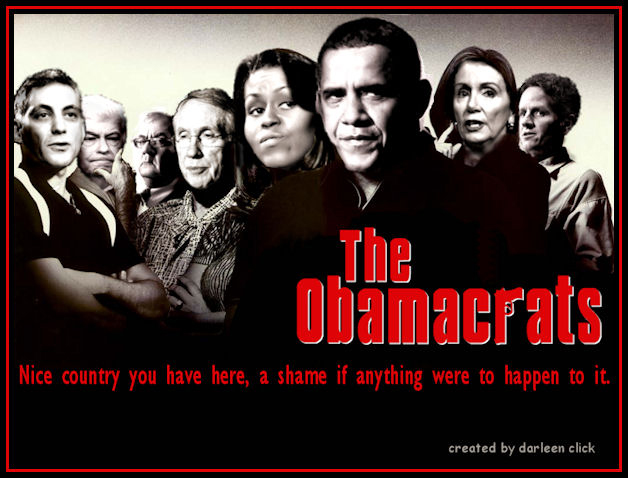 The Examiner is a blog. Newsmax is well, Newsmax.

Snopes says that it is false.


Thank you for your thoughtful and well-laid out post. It really aided in putting this thread to rest with a definitive conclusion.

independent_thinker2002 said:
The Examiner is a blog. Newsmax is well, Newsmax.

Snopes says that it is false.