Coal miners and abacus operators: The price of partisanship and being pandered to

Part I of II

May 2016:
Perhaps you recall Trump's May 2016 campaign speech in Charleston, WV when he remarked to "coal country":​
"I am thinking about the miners all over this country. We’re going to put the miners back to work. We’re going to get those mines open. If I win, we’re going to bring those miners back....For those miners, get ready, because you’re going to be working your asses off."​
That was his retort availed to decontextualize Hillary Clinton's, admittedly ill-phrased, debate remark about putting coal out of business. What Clinton was alluding to is that clear as the day is long, and equally immutable, was the "writing on the wall" as goes future prospects for the coal industry, and nothing she or any other politician could do was going to change that "writing" because it wasn't a matter of political will and wherewithal, it was a matter that times simply have changed. The woman was telling people the hard truth they needed to hear.​
August 2018:
Trump returned to Charleston as POTUS and summarily declared:​
"I know this doesn't matter to you, but we are putting our great coal miners back to work....We are back. The coal industry is back."

"Just today, we announced our new affordable clean energy proposal that will help our coal-fired power plants...I joke that I'll have Patrick Morrisey coming to me soon, he'll be your Senator, and he'll say, 'Mr. President, the people of West Virginia can't stand winning so much. They haven't won in decades and now you're winning with coal.'"
​
Trump was there to campaign for WV US Senate candidate Pat Morrissey; Pat lost. Pat too resurrected the hackneyed vitriol toward Hillary and, in turn, alleged:​
"Donald Trump and I are fighting everyday for our coal miners...We're going to stand up for coal.​
Well, here we are in 2019. Where are coal miners' asses? Still on, or are they off? Are those mines open?

(cont'd due to character limit)

It's now Jan. 2019, and more coal-fired power plants have closed in Trump's first two years than in Obama's entire first term. Art Sullivan, a former coal mine manager sees now what myriad Trumpkins in 2016 refused to see, "He's trying to get their votes. He's lying to them....What you need to say to coal miners is 'We're going to figure out a way to give you better, safer, healthier jobs.'"

For the love of Christ, that's precisely what Hillary said when she made her "put coal miners out of work" remark.

Frigging Trumpkins, with their predilection for conspiracy theorizing, are quick to infer the worst from what people say to them and "translate" it into some sort of utter absurdity. What they should have heard in Hillary's remarks is "I want to train you to transition to another field of energy development that's cleaner and safer with better long-term prospects." That's damn sure the inference I took from the totality of her remarks. I suspect so too did everyone who, having more than a 6th grader's reading/listening comprehension skills, doesn't suffer from Dunning-Kruger syndrome.


So here we are, two years into Trumpism and what's happening? Coal plants are closing "left and right." Trump's not closing them and neither is Hillary. They're closing down because changes in the market and the culture had, by 2015, made it inevitable that they would. Democrats tried to tell "coal country" voters as much, but those partisan proles didn't believe them. The information to see as much for themselves was available on the Internet, but those indolent prats wouldn't bother to look for themselves, instead buying into Rush, Sean, et al's BS. Their political "patron saint," Ronald Reagan may as well never have said, "Doveryai, no proveryai." That maxim is relevant for everyone's daily life.

Now, none of this would be problematic except that, as the shutdown has shown us, Trump doesn't truly give a damn about working class and middle class Americans. People railed about Hillary's connections with Goldman. How the hell do you think she was aware of the "writing on the wall?" I-bankers like Goldman Sachs not only put together IPOs, they also put together investment packages for things like power companies' investment in new generation facilities. Want to know where corporate America is putting its money? Talk to I-bankers. Hillary talked to I-bankers; Trump, who'd burnt so many bridges with US bankers, talked to Russian oligarchs, and they damn sure don't advance what's good for the US.

So now, in the wake of Trump's avuncular patronizing of coal miners, the government is shutdown, coal mines are closing at "light speed" as electricity producers convert to other energy sources. And what is Trump doing to attenuate the worsening economic plight besetting WV and it's 24K government workers and 10K coal industry workers? Judging by the things he's discussed when he's not on the campaign trail, at best, nothing.

If I had been the son of a coal miner, I would have left the damn mines. But most people don't have the imagination--or whatever--to leave their mine. They don't have "it."
-- Donald Trump, Interview with Playboy Magazine​

X, I love you like brother, but how long does it take to compose an eyesore like the OP?

Rexedgar said:
X, I love you like brother, but how long does it take to compose an eyesore like the OP?

I suggest, going forward, your friend ask for him-/herself.

How long it takes varies with the nature of the content and topic, and whether "life" interrupts me as I compose the post.
Popping out a 500-1000 word essay about something on which one is "up to speed" is no feat. It's something I had to do in high school at least twice a week for an English or history class quiz. We were given one essay question and 10-15 minutes to write a short-essay answer to the question. Part of that was to test us to make sure we were grasping the material; part of it was to prepare us for taking AP exams and for college writing assignments. (We also had monthly 5-10 page papers.) I assure you, it paid off; in college any paper shorter than 20 pages meant nothing but reading and note-taking over the course of two or three weeks and a night or two of writing, submit the draft for the prof to give it a preliminary review, whereafter a few hours of tinkering to incorporate his feedback and "that was that."

So today we learn that Trump [intervened] in support of coal plant owned by major donor. His doing so wouldn't raise eyebrows were not so the findings and phenomena noted in the linked content in my OP pair and the fact that he [called for the TVA] to save coal plant supplied by major supporter. And note that Trump appears to have "in his pocket" four of the seven regulators on the TVA board.

Do I have a problem, per se, with the plant remaining open. I have a problem with Trump having made the lofty promises he did about the coal industry, and of all the plants that are closing "left and right," Trump steps in, as it were, to "save" the one owned by a huge donor to his PAC, but narry any others, to say nothing of bringing to fruition anything that would attenuate the macro-level coal industry demise. And, yes, I know he can't stop an industry-level trend driven by irrefutable and rigorously conducted financial and economic analysis, and knowing so, just as Trump's economic advisors do and have surely told him, I know too it makes no sense for him to "step up" on behalf of just this one particularly coal plant.

Yet more WVa coal mining families not "put coal miners back to work," as Trump promised he'd do, some 400 more of them are out of work.
-- Wyoming County, WV mine that employs approximately 400 set to close
-- Pinnacle Mine closing will result in $1.5 million budget hit 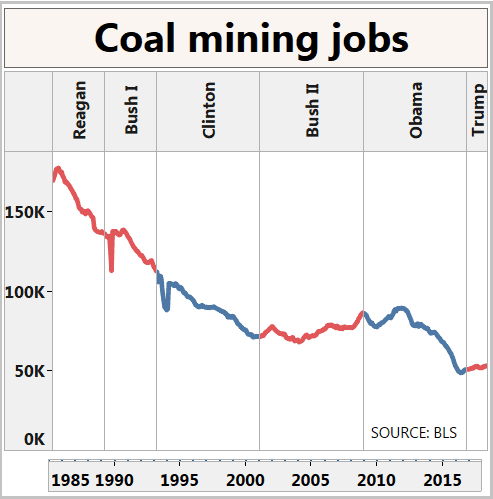 The key driver for coal-mining jobs is market forces at home and abroad. Coal-fired power plants have continued to shut down under Trump’s watch, eliminating a major source of demand for the nation’s miners.

And therein lies the problem with Trump: given his (and other GOP-ers') recriminations about Obama's "you can keep your doctor" mischaracterization, one'd think Trump would have known better than to promise to achieve an outcome contradictory to the market's direction. That's the sort of thing a competent businessman knows and knows not to promise.
-- Coal Power Plant Shutdowns Surge Under Trump --> "A total of 23,400 megawatts of coal-fueled generation shut down in 2017 and 2018. From 2009 through 2012, the amount was 14,900. And 2018 saw the highest level of shutdowns since 2015. A megawatt can power 1,000 typical homes."
-- Coal mines closing at a faster rate under Pres. Trump than Obama


There is an alternative to being put back to work in the coal industry: transitioning to and being put to work in non-coal industries.
-- Navajo imagine a future without coal
Because one can no more stop the market from moving than stop the rain from falling, that's what prudent folks do in response to the market's "writing on the wall," and that's exactly what some Navajo coal industry are doing. Then again, Native Americans, like other brown people, know better than to put their trust and hope in Trump. (The Native American Electorate’s Role in the Blue Wave Referendum on President Trump’s Policy Agenda)

One'd think Trump's Administration would have implemented a host of retraining programs and alternative, green energy initiatives in "coal country" so former coal workers can obtain similarly good work, just not in the coal industry. Doing so would inspire otherwise despondent coal-industry-dependent workers to be indifferent about not working in coal. Alas, rather than "balls to the wall" doing so, Trump's tack is to toss the crumbs of deregulation, which is good for coal mine/plant owners and operators' profit margins but doesn't create jobs.
You must log in or register to reply here.
Share:
Facebook Twitter Reddit WhatsApp Share Link
Top Bottom