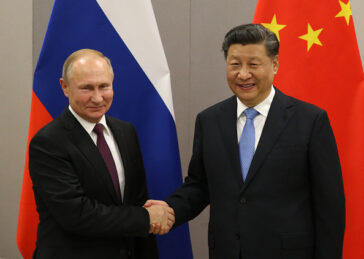 3.16.22
China has begun a subtle damage control campaign after realizing how its refusal to condemn Russia is affecting its international image. Three weeks into President Vladimir Putin's military campaign against Ukraine, Chinese officials still do not to call it an invasion and rarely use the word "war." At the highest levels of government, Beijing continues to support Moscow's position on NATO, to abstain at the United Nations and to allow its Foreign Ministry and state media to peddle Russian conspiracy theories about U.S. biological weapons in Ukraine. Behind the scenes, however, something is beginning to shift. President Xi Jinping has not spoken to his Ukrainian counterpart Volodymyr Zelensky since the hostilities began. But in calls with foreign heads of state, Xi is stressing support for peace talks. His officials, meanwhile, are trying to shake China's "pro-Russia neutral" reputation while starting to show sympathy for Ukraine. What China knew or didn't know about Putin's plan has been the subject of debate since the invasion on February 24, especially as the bombardment began just 20 days after Xi's declaration of a "no limits" partnership with the Russian president.

A protracted war in Ukraine and growing international pressure against those aligned with Moscow have laid bare Beijing's options: it either knew about Putin's plan and did nothing, or it too was duped by Russia, its closest strategic partner in the new Cold War against the West. Both scenarios are bad, but one may be less bad than the other. Beijing appears to have chosen the benefit of ignorance over the unflattering image of having bet on the wrong horse. "We will respect the path chosen by Ukrainians because this is the sovereign right of every nation. China will never attack Ukraine, we will help, in particular in the economic direction." Cynical observers may think China is playing both sides. Beijing has yet to condemn Moscow openly and won't join sanctions against Russia. U.S. officials say China is already assisting Russia financially and have expressed fears that the support could rise to the level of material aid to help sustain Putin's war. However, there is no indication that China's leadership is willing to go so far, especially as it attempts to salvage its reputation as a responsible major power and member of the UN Security Council.
Click to expand...

Beijing wants it both ways.... a quasi-official China/Russia alliance against the United States, and increasing attempts to distance itself from Putin's bloody and unprovoked war against Ukraine.