Charlottesville tries to heal after driver at rally convicted of murder

Charlottesville tries to heal after driver at rally convicted of murder 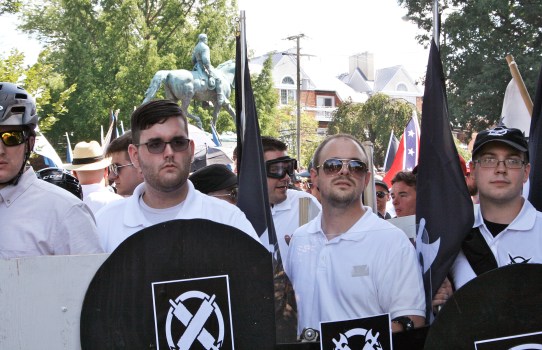 12/7/18
CHARLOTTESVILLE, Va. (AP) — A man who drove his car into counter-protesters at a 2017 white nationalist rally in Virginia was convicted Friday of first-degree murder, a verdict that local civil rights activists hope will help heal a community still scarred by the violence and the racial tensions it inflamed nationwide. A state jury rejected defense arguments that James Alex Fields Jr. acted in self-defense during a "Unite the Right" rally in Charlottesville on Aug. 12, 2017. Jurors also convicted Fields of eight other charges, including aggravated malicious wounding and hit and run. Fields, 21, drove to Virginia from his home in Maumee, Ohio, to support the white nationalists. As a large group of counter-protesters marched through Charlottesville singing and laughing, he stopped his car, backed up, then sped into the crowd, according to testimony from witnesses and video surveillance shown to jurors. Heather Heyer, a 32-year-old paralegal and civil rights activist, was killed, and nearly three dozen others were injured. The trial featured emotional testimony from survivors who described devastating injuries and long, complicated recoveries.

After the verdict was read in court, some of those who were injured embraced Heyer's mother, Susan Bro. She left the courthouse without commenting. Fields' mother, Samantha Bloom, who is disabled, left the courthouse in a wheelchair without commenting. White nationalist Richard Spencer, who had been scheduled to speak at the Unite the Right rally, described the verdict as a "miscarriage of justice." "I am sadly not shocked, but I am appalled by this," he told The Associated Press. "He was treated as a terrorist from the get-go." The jury will reconvene Monday to recommend a sentence. Under Virginia law, jurors can recommend from 20 years to life in prison on the first-degree murder charge. Fields is eligible for the death penalty if convicted of separate federal hate crime charges. No trial has been scheduled yet.
Click to expand...

I hope Fields gets life without parole.