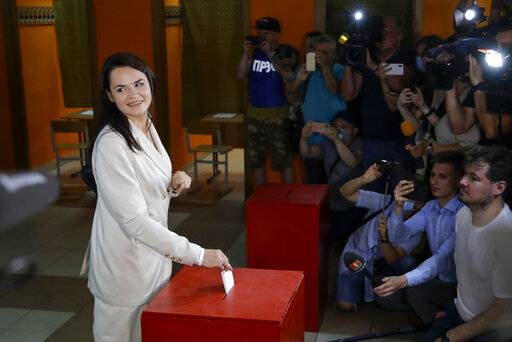 8/10/20
The main challenger in Belarus's disputed election called on President Alexander Lukashenko to give up power on Monday after a fierce police crackdown on protesters saw dozens wounded and hundreds detained. Svetlana Tikhanovskaya, whose surprise candidacy is posing the biggest challenge to the veteran leader in years, said Sunday's presidential vote had been rigged and accused authorities of resorting to force to hold on to power. "The voters made their choice but the authorities did not hear us, they have broken with the people," Tikhanovskaya told a press conference after police used stun grenades, water cannon and rubber bullets to disperse crowds in Minsk and other cities. "The authorities should think about how to peacefully hand over power to us," she said. "I consider myself the winner of this election." Election officials confirmed Lukashenko's re-election to a sixth term on Monday morning, saying he had won with more than 80% of the vote, with Tikhanovskaya coming second with just under 10%. European governments questioned the results of Sunday's election, with the European Union calling for ballots to be "accurately" counted, Germany voicing "strong doubts" about the conduct of the vote and Belarus's neighbor Poland calling for an emergency EU summit on the situation.

Russian President Vladimir Putin congratulated Lukashenko, a longtime ally, as did Chinese leader Xi Jinping. Lukashenko was defiant, vowing he would not allow Belarus to be "torn apart" and denouncing the protesters as foreign pawns. Tikhanovskaya, a 37-year-old stay-at-home mother and political novice, galvanized the opposition during the election campaign, attracting tens of thousands of supporters to the country's biggest demonstrations in years. Alexander, a 35-year-old protester in Minsk, accused Lukashenko of blatantly rigging the vote. "I came out to protest because the country needs a change in power," he told AFP. "This is a crime, a mockery of our people." Tikhanovskaya decided to run for president after the authorities jailed her husband, popular blogger Sergei Tikhanovsky, and barred him from running. On Sunday afternoon, huge queues formed outside polling stations in Minsk and other cities, after Tikhanovskaya urged her supporters to vote late to give authorities less chance to falsify the election. Many wore white bracelets that have become a symbol of the opposition. Tikhanovskaya had said that if she won she would release political prisoners and call fresh elections to include the entire opposition.
Click to expand...

As I predicted, Lukashenka won via a rigged election.

There was unrest all night in Belarus as the people well know Lukashenka stole this election. The regime used brute force to break up crowds and arrest protesters.

If Alexander Lukashenko starts real integration with Russia within the framework of the Union state, he will go down in history as a great politician. And if he don't, he won't be able to milk Russia anymore. Something like that.

Ringo Stalin said:
If Alexander Lukashenko starts real integration with Russia within the framework of the Union state, he will go down in history as a great politician. And if he don't, he won't be able to milk Russia anymore. Something like that.
Click to expand...

Lukashenka has weakened himself with his people, with Vladimir Putin, and with the international community.

His people will despise him, the international community will again consider Sasha a pariah dictator, and Putin will of course try to take advantage.

His last name is LukasenkO. Don't repeat after your senile presidential candidate.

EU Foreign Minister Josep Borrel condemned Belarus for the disproportionate use of force, violence and arrests of protesters.
This is the same Borrel, who supported a tough crackdown on participants in the Catalan referendum and a prison sentence for its organizers!
Well, #ThisIsCompletlyDifferent!