Even the Canadians know that La Raza is a terrorist organization! WAKE UP AMERICA!!! 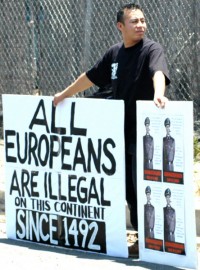 Much has been in the news recently about La Raza, what a military intelligence acquaintance recently dubbed “a mestizo terrorist organization.” Republican congressman Charlie Norwood of Georgia’s ninth district has called La Raza a “radical…pro-illegal immigration lobbying organization that supports racist groups.”

What is La Raza? The National Council of La Raza (its full name) is a pro-mestizo advocacy organization. The title “La Raza” is Spanish for “the race,” and its underlying rational is to support the interests of the mestizo race (people who are mostly Amerindian blood with a little Spaniard blood mixed in - people mostly from Mexico, Central America, and neighboring areas).
La Raza is anti-European in the sense that it opposes European Americans (whites) and favors the interests of indigenous mestizos. La Raza is notorious for supporting causes like amnesty, illegal immigration, birthright citizenship, chain migration, attempting to censor white journalists (most famously, Lou Dobbs), and removing white authors from schools to be replaced by mestizo authors.
Unknown to many is the financial support La Raza receives from donors like Wal-Mart, Exxon Mobil, McDonalds, and hundreds of other corporations. In more civilized times, these donations would be considered treason.
But many of these corporations support La Raza for two reasons: they have bought into the religion of political correctness, and they want cheap labor. (Subsequently, I have not set foot in a Wal-Mart for over six years because of their support for La Raza - not to mention the fact Wal-Mart imports most of its goods from China and practices crony (tax-payer subsidized) capitalism.)
Also known to many is the sort of radicals attracted to La Raza. Just look at the statements of pro-immigration activist Jorge Sanchez:
“Around the year 2040, whites will become a minority in the United States and, believe me, it will be payback time.”
Related in name to The National Council of La Raza is the political organization La Raza Unida Party (RUP), roughly translated as “the party of the [mestizo] race.” To gain a sense of its anti-Western flavor, read the quotes of its founder José Ángel Gutiérrez:
“We remain a hunted people. Now you think you have a destiny to fulfill in the land that historically has been ours for forty thousand years. And we’re a new Mestizo nation.”
“Our devil has pale skin and blue eyes…”
“We have got to eliminate the gringo, and what I mean by that is if the worst comes to the worst, we have got to kill him.”
We live in insane times. Only 30 years ago, La Raza would have been considered a treasonous organization, but now it’s praised by anti-occidental leftists like Barack Hussein Obama and Sonia Sotomayor, and anti-occidental neoconservatives like Lindsey Graham and Linda Chavez.
Paul Starobin recently wrote in the Wall Street Journal that the United States has outlived its usefulness and it’s now high time to break up into smaller countries. Perhaps he’s right. Although some areas would be lost to the Third World, the remaining smaller pro-Western republics would be more immune to the lobbying efforts of terrorist organizations like La Raza.