From the time that Charles Hickman, the only black worker in an all-white pipe company in Conroe Texas, began work in 2002, he was subjected to racial epithets almost every day. Then one day, he was called into the bathroom, where a noose was put around his neck and tightened. The damage to his body resulted in his having to go on permanent disability.

Guess what else? The sheriffs department never filed against the workers who did this to him, and although Hickman was unable to return to work, the Texas Workforce Commission ruled that Hickman left his job voluntarily. This is the extent of ignorance, rascism, and hatred that still exists in many parts of Texas.

But Hickman has now had the last laugh. Hickman has now won a one million dollar settlement, and in addition, the pipe company has to plant a tree on its property commemorating Hick's tenure there.

It is now 2006, and we still hear stories like this one almost every day. Those who argue that the days of the KKK are over are dead wrong. Hate and ignorance still live. However, the court system is much improved, as can be attested by this week's verdict.

To anyone who supports such violence - You can argue in favor of acts of hate all you want, but if you commit those acts, the good ole' boys in the sheriffs department can no longer protect you. You will lose your bank account, your car, your home, and even the shirt off your back. Time for you to finally go quietly into the night and disappear forever.

danarhea starts a thread. What's next, dogs and cats living in peace?

A black man was found dead, wrapped in chains, at the bottom of the San Jacinto River just beneath the I-45 underpass Wednesday morning.

According to a Montgomery County Sheriff's Department spokesman, "Ain't it just like a ni**** to steal a bunch of chains and try to swim across the river?" [/sarcasm]
Click to expand... 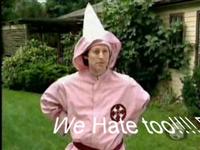