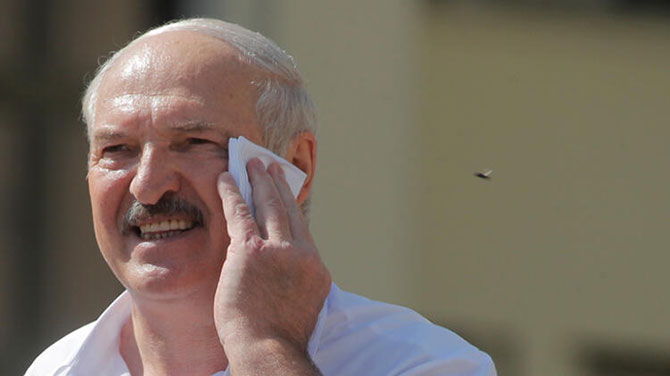 Lukashenka was called a liar and told to leave the country at the Minsk Tractor Plant (MZKT).

8/17/20
Workers at a state-run factory confronted Belarusian President Alexander Lukashenko with chants of "Leave!" on Monday as pressure built on the strongman to step down over a disputed election. Employees at several factories and state television walked off the job after a historic protest on Sunday brought tens of thousands to the streets. In footage widely shared on social media, Lukashenko was confronted by workers at the Minsk Wheel Tractor Plant (MZKT) who shouted him down with chants of "Leave!" as he tried to give a speech. A visibly angry Lukashenko walked off the stage, saying: "Thank you, I have said everything. You can shout 'Leave'." Pressure has been building on the ex-Soviet nation's longtime leader since the Aug. 9 election, which he claims to have won with 80% of the vote. More than 100,000 people took part in a "March for Freedom" in the capital Minsk on Sunday following calls from main opposition figure Svetlana Tikhanovskaya for continued demonstrations. A brutal police crackdown has drawn widespread condemnation and appears to have turned even Lukashenko's support base at state-owned industries against him. European Union leaders are to hold an emergency video summit on Belarus on Wednesday, while Germany said it was prepared to back an expansion of previously announced sanctions.

Hundreds of workers and protesters gathered outside the MZKT plant where Lukashenko was visiting, waving the red-and-white flag of the opposition and demanding his resignation. "We plan to participate in all peaceful strikes, in all peaceful protest actions... so that the government will finally realize they are fighting with their own people," Ilya Rybkin, a 30-year-old road worker, told AFP outside the plant. Lukashenko then told the MZKT workers that he was ready to transfer powers under a new constitution within one or two years. “We can’t give this constitution to God knows who, that would be a tragedy,” he said, adding that he has rejected two proposals on a new constitution and that work was underway on a third proposal. In another video recording of the speech, he said: "Until you kill me, there will be no elections." In a video posted online Monday, Svetlana Tikhanovskaya — who claims she won the election — said that although she never planned to enter politics she was prepared to temporarily take over the country's leadership. "I am ready to take responsibility and act as a national leader during this period."
Click to expand...

Blue collar factory workers in Belarus are the political base of Alexander Lukashenka. If he has lost their support, all that is left for him is the KGB and the military.

There is significant pro-Russia sentiment in urban Belarussian society. And no doubt the Kremlin has spies and moles in every government/military department.

Related: After Huge Minsk Opposition Rally, Has Lukashenka Run Out Of Political Options?

So many parallels for the US to consider, including begging for help from Putin to retain power.
D

Manc Skipper said:
So many parallels for the US to consider, including begging for help from Putin to retain power.
Click to expand...

LOL. If he falls, the whole country falls. It is the next Ukraine. Those workers are begging to labor under Putin directly.

You pray that the regime doesn't crack down and start killing people.

swing_voter said:
It's like watching the demonstrations in Hong Kong.

You pray that the regime doesn't crack down and start killing people.
Click to expand...

I hope it doesn't come to that. OMON/KGB forces are brainwashed and trained to do as ordered.

The now defunct Berkut (Golden Eagles) of Ukraine shot over 100 people to death near Kyiv's Independence Square on February 18/19 2014.

Drawdown said:
LOL. If he falls, the whole country falls. It is the next Ukraine. Those workers are begging to labor under Putin directly.
Click to expand...

If you say so Dmitry.

swing_voter said:
It's like watching the demonstrations in Hong Kong.

You pray that the regime doesn't crack down and start killing people.
Click to expand...

They have already admitted a couple of weeks ago to using live rounds.

Manc Skipper said:
They have already admitted a couple of weeks ago to using live rounds.
Click to expand...

Yes, one individual died in the street after being shot.

Despite the outflow of deposits and the conversion of savings into dollars, Belarusian banks currently have a significant reserve of liquidity, and can also count on the support of the state...

These insidious tyrants always build up so many things, then freedom loving crowd have difficulty to break them....