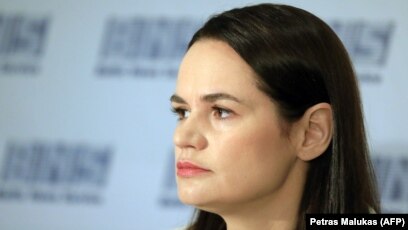 8/22/20
Belarusian opposition leader Svyatlana Tsikhanouskaya will meet on August 24 with U.S. Deputy Secretary of State Stephen Biegun in a sign of deepening U.S. involvement in finding a peaceful resolution to a disputed presidential election in Belarus. Tsikhanouskaya's team said on August 22 that the No. 2 U.S. diplomat would meet Tsikhanouskaya in Lithuania, where she fled following the contested August 9 vote in Belarus that has triggered two weeks of protests. Biegun also will meet Lithuania's defense and foreign ministers to discuss the situation in Belarus and bilateral and defense matters, Lithuania's Foreign Ministry said. Biegun will travel on to Russia later in the week. Russian Deputy Foreign Minister Sergei Ryabkov told Interfax on August 22 that talks in Moscow would go beyond the subject of Belarus. "In addition, we're meaning to have an in-depth discussion with him of all things related to Russian-U.S. relations in various aspects," Ryabkov said. Earlier on August 22, Belarusian President Alyaksandr Lukashenka ordered his defense minister and westernmost military forces to adopt "the most stringent measures" to protect the country's borders in the face of what he suggested was a foreign-backed plan for a "color revolution" in the country.

"Everything is clear," Lukashenka was quoted as saying to state-run Belta news agency. "As we expected, everything is going according to a plan for a color revolution with the agitation of the internal political situation in the country." Lukashenka cited an unconfirmed "movement of NATO troops to the borders." Belarus shares its western border with NATO members Latvia, Lithuania, and Poland. "We see that NATO troops are seriously stirring in the immediate vicinity of our borders on the territory of Poland and Lithuania," the Russian TASS news agency quoted Lukashenka as saying. NATO said the claims were "baseless". "As we have already made clear, NATO poses no threat to Belarus or any other country and has no military buildup in the region," it said in a statement. Tsikhanouskaya said on August 21 that she had filed an official complaint against the announced results, saying her compatriots "will never accept" Lukashenka's continued rule. "It should be clear to the president that there is a need for change," Tsikhanouskaya said at her first press conference, on August 21, since fleeing to Lithuania last week amid fears of arrest. "I hope that good sense prevails and the people will be heard and there will be new elections."
Click to expand...

Playing the victim, Lukashenka has to fabricate internal and invasion conspiracies to explain the nationwide protests and keep the OMAN/KGB/Army on high alert.

US President Donald Trump has been absolutely silent regarding Belarus. He won't say anything that may upset his BFF Vladimir Putin of Russia.