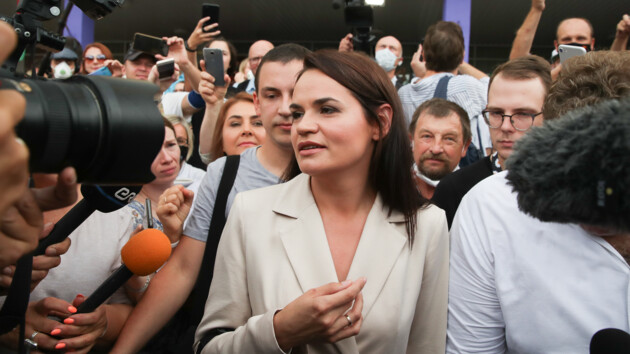 8/31/20
They are Europe's "disappeared." Dozens of people arrested while protesting the Belarus presidential election have vanished and remain unaccounted for — and the EU should not forget them, opposition leader Svetlana Tikhanovskaya said Monday. In an interview with Politico, Tikhanovskaya, who fled to neighboring Lithuania in fear for her own safety, described her missing supporters as political prisoners made to disappear by the regime of strongman Alexander Lukashenko, who is still clinging to power despite continuing widespread protests and labor strikes over the disputed August 9 election. "What I want to tell is that a lot of people in Belarus now are political prisoners," Tikhanovskaya said, speaking by video-conference. "They just are in jail without any court, and they are in there only for their, I don't know, for their wish to talk about what's going on in Belarus, about their desire to live in a free country. "After the demonstrations," she said in halting but clear English, "we still don't know where about 70 people are and they are missing and it's a very big problem for us because it shouldn't be in a European country in the 21st century that people are missing and authorities don't do anything to find them.

"Everybody has seen all the violence that our authorities have committed, our police committed toward all these peaceful people," Tikhanovskaya said. "And not one criminal case was organized to investigate this, you know these crimes, as if it's normal. No, it's not normal and cases should be opened against every policeman that beat these people." Tikhanovskaya spoke to Politico a day after tens of thousands of people again took to the streets in Minsk, and Lukashenko deployed large contingents of riot police, and cordoned off key buildings, including the residence of the embattled leader who was celebrating his 66th birthday. She expressed confidence that the protests, along with labor strikes, would continue until Lukashenko relinquished power, and she suggested that his opponents were prepared for a long struggle that could take on new forms. "Strikes are extremely important and also strikes can have different forms," she said. "There are many ways, and it is not only through demonstrations. "I know that this will not stop," she added. "You should understand ... we woke up ... we will not accept him anymore."
Click to expand...

Belarus is an example of how an individual such as Lukashenka, supported by only a minority, can co-opt democracy using the levers of government.

Lukashenko is called the last dictator of Europe, but this is not quite true. In Montenegro, 30 years in power was Djukanovic and his clan. August 30, he was defeated in the parliamentary elections, and now the country will be governed by a pro-Serbian and pro-Russian government. This is good news. I mean, isn't it good to have an irremovable dictator removed from power?

Meh. Montenegro is a small boil on the butt of Europe.

Getting back to the OP, the UN should launch an investigation into the Belarus missing.

"We in America will never surrender to the power of the crowd, because if the crowd rules, then democracy is dead," Trump said.

Donald is the best! I will pass on his words to Lukashenko.