From the Economist: An Italian budget showdown underlines the need for euro-zone reform

Trouble began earlier this year when the populist Five Star movement, led by Luigi Di Maio, formed a government with the right-wing Northern League, led by Matteo Salvini. Both promised budget goodies: Mr Salvini a hefty tax cut and Mr Di Maio a basic minimum income. Such largesse may test the deficit limit of 3% set by the eu’s stability and growth pact. And it seems certain to break other fiscal rules set by the bloc: the government’s initial budget plan is forecast to raise borrowing to 2.4% of gdp in 2019, above the 0.8% target to which Italy previously committed itself and enough to reverse recent, modest declines in its debt burden.

The EU did not take the news well. On November 5th other countries’ finance ministers warned that failure to revise the budget would lead to an “excessive deficit procedure”, and possible sanctions. But Italians are unbowed. Mr Di Maio, now deputy prime minister, argued in comments to the Financial Times that Italy’s fiscal expansion will prove so successful that other European leaders will clamour to follow, citing, somewhat dubiously, faster growth in America after a budget-busting Republican tax cut.

Both sides have their points. Italians are frustrated. Real incomes in Italy have fallen since joining the euro area; inequality and poverty have risen. Economic growth briefly rose to almost 2% in mid-2017 but has since slipped back to close to zero. At 10.1%, the unemployment rate is well above the pre-crisis low of 5.8%. Economic weakness is re-emerging even as the European Central Bank reduces its stimulative asset purchases and prepares for eventual interest-rate rises. Recent indicators of service-sector and manufacturing activity suggest that the economy is at risk of falling back into contraction. A return to recession would prove disastrous for Italy’s politics and its long-run budget position. And a bit more spending now would probably not spark a bond-market panic, since the government’s debt has an average maturity of nearly seven years and most is held domestically. A little forbearance on the part of the eu might therefore enable a dangerous political moment to be defused at little economic cost. 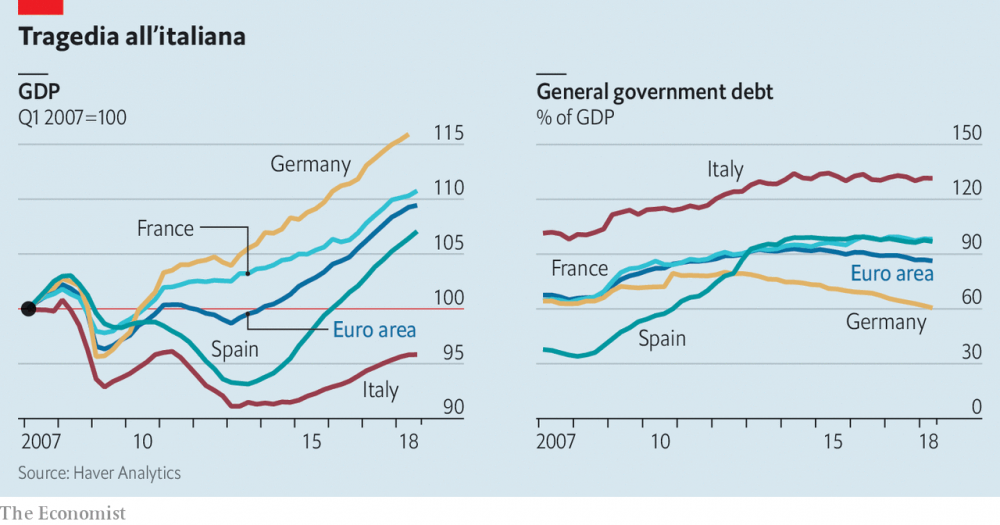 Yet it is hard to fault the EU for its wariness. Italy’s slow growth reflects serious structural problems. The European Commission estimates that the country’s natural unemployment rate has risen from about 8% in 2007 to 10% now, suggesting that boosting employment is a matter more of reform than stimulus. The OECD estimates that Italy’s output gap, the shortfall between an economy’s actual and potential output, will have closed by next year. Potential output—ie, what an economy can sustain without inflation accelerating—is easy to underestimate. But some variables suggest that labour-market slack is disappearing. For example, after a long period of decline year-on-year wage growth roughly doubled over the summer, to 2%. Nor have Italians been deeply mired in austerity in recent years. Italy’s structural budget deficit has nearly doubled since 2015. Its pensions remain among the euro area’s most generous, a perversity given the disproportionate economic pain borne by young Italians over the past decade.
Click to expand...

Maybe, maybe not. What Italians must do is wake up to the brazen fact that their political system is a shambles. The people in charge are there only because the Italian voters rejected well-known past-election politicos. Like Berlusconi!

In a sense, they were right to do so. But in another sense, neither is the political-sharing in place any great hope! And neither is its leveraged impact on the rest of the EU!

I'm not sure the "debt binge" initiated by Trump is actually working. Like drugs, feel good today, in the sewers tomorrow.. salvine wants to copy Trump in Italy. It'll work good until the bill comes due.
/

DaveFagan said:
I'm not sure the "debt binge" initiated by Trump is actually working. Like drugs, feel good today, in the sewers tomorrow.. salvine wants to copy Trump in Italy. It'll work good until the bill comes due.
/
Click to expand...

There's also Luigi di Maio to worry about. The M5S are syncretic in the way they are effectively stealth NAZBOLs in populist sheeps' clothing. I'm not sure who/which foreign power they are acting on behalf of (could be US, could be Russia, China, etc) but it most certainly isn't the EU and Western civilization.
You must log in or register to reply here.
Share:
Facebook Twitter Reddit WhatsApp Share Link
Top Bottom