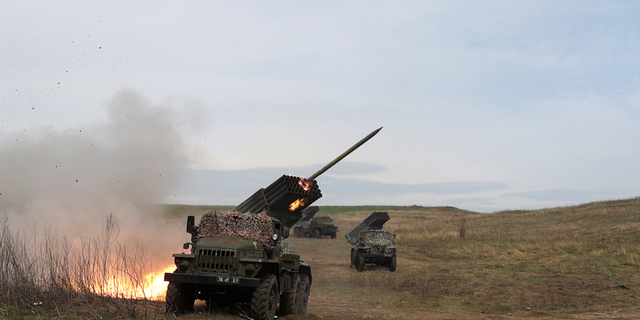 4.13.22
Moscow has shifted its focus in its war against Kyiv after nearly 50 days of fighting with a senior U.S. defense official reporting Wednesday that all of Russia’s ground forces have now entered Ukraine’s eastern flank.
Russia launched its second convoy this week and ground forces are flooding across Ukraine’s northern border into the Lunhask region, the official said. "I think you’d go so far as to say all their ground forces are either in the Donbas – Luhank Oblast or the Donetsk Oblast – and then in the south arrayed all the way from Mariupol down to Mykolaiv," the official added. Defense officials have warned that Russia’s determination to continue with its "special military operation" in a concentrated location like the Donbas, will mean an even more brutal fight ahead. Zelenskyy said this week that Ukrainian forces were not getting what they needed from allies to quickly end the war before it escalates even more in eastern Ukraine. The Ukrainian president again urged the U.S. and NATO to send warplanes so that his troops could remove the weeks-long blockade on Mariupol and help repel more invading Russian forces from taking a greater hold in the region.

Ukrainian President Volodymyr Zelenskyy mocked Russian President Vladimir Putin’s invasion Wednesday, questioning how many will need to die before he gives up. "Do you remember how Russia bragged that they would seize Kyiv in 48 hours? Instead, Ukraine has been repelling the enemy for 48 days," he said in an address to the nation. "They say they do everything for the sake of the people, for the sake of Donbas, but even during World War II, Donbas did not see such cruelty in such a short time," he continued. "In Donbas, the story of the siege of Leningrad was repeated. What would the people who died or almost died in Leningrad during the Nazi blockade say about this? What would they say about the blockade of Mariupol?"
Click to expand...

Russia has the forces it has for this massive push. Not much more available. The next month should tell the tale.

Victory for Russia (establishes a land-bridge to Crimea). Victory for Ukraine (Russia is pushed back to Luhansk/Donetsk oblasts). Stalemate (no further movement - trench warfare).