A Portland Bible burning, a Russian news agency and a story too good to check out

A Portland Bible burning, a Russian news agency and a story too good to check out 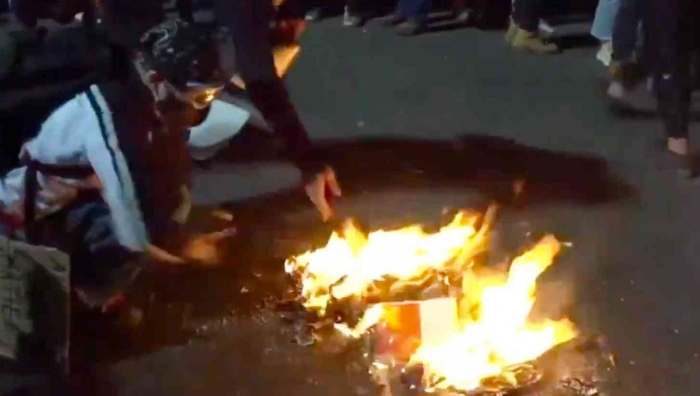 8/11/20
WASHINGTON — For some of President Donald Trump’s loudest cheerleaders, it was a story too good to check out: A video appeared to show Black Lives Matter protesters in Portland, Oregon, burning a stack of Bibles, and then topping off the fire with American flags. The story was a near-perfect fit for a central Trump campaign talking point — that with liberals and Democrats comes godless disorder — and it went viral among Republicans within hours of appearing earlier this month. The New York Post wrote about it, as did The Federalist, saying that the protesters had shown “their true colors.” Sen. Ted Cruz, R-Texas, said of the protesters, “This is who they are.” Donald Trump Jr., the president’s son, tweeted that antifa had moved to “the book burning phase.” Yet in the rush to paint all the protesters as Bible-burning zealots, few of the politicians or commentators who weighed in on the incident took the time to look into the story’s veracity, or to figure out that it had originated with a Kremlin-backed video news agency. And now, days later, the Portland Bible burnings appear to be one of the first viral Russian disinformation hits of the 2020 presidential campaign. The Russian technique is a kind of information laundering, akin to money laundering. Stories originate with Russian-backed news sites, some of them directly connected to Moscow’s spy agencies, officials and experts said. They are then picked up by Americans on social media or in domestic news outlets, and their origins quickly become obscured.

The video on which the story is based came from Ruptly, which regularly streams a live feed from the protests for a few hours each night and then clips together a short video of highlights. Apart from the Ruptly videographer, only one other journalist — a local television reporter — heard about the Bible burning, and noted it with a single sentence buried in a lengthy report on that night’s protests. The story, by KOIN, the local CBS News affiliate, also reported that a group of women calling themselves Moms United for Black Lives Matter attempted to put out the fire — a detail not included in the Ruptly video. The story was produced by a research fellow at the Center for Syncretic Studies, a think tank in Serbia that is similarly believed to have ties to Russian intelligence. The article was then published by InfoBrics. In turn, it was picked up by The Duran, an independent website based in Cyprus that often spreads Russian disinformation. Neither the U.S. nor allied governments have publicly identified The Duran as having direct ties to Russia’s spy agencies. But the site is where Russian state-sponsored disinformation and fringe theories come together, according to a NATO cyber-analyst who spoke on the condition of anonymity because he was not authorized to speak publicly. The article jumped from The Duran to popular American conspiracy sites, such as ZeroHedge and RedPill.Institute.
Click to expand...

And for Americans who are unaware, Ruptly is owned by Russia Today, which is a part of the RT network, fully owned by the Kremlin.

So were the Bible/flag burners Russians?

Rogue Valley said:
A Portland Bible burning, a Russian news agency and a story too good to check out

And for Americans who are unaware, Ruptly is owned by Russia Today, which is a part of the RT network, fully owned by the Kremlin.
Click to expand...

Okay. The news came through a Russian-linked propaganda network. So did the Portland Bible burning happen or did it not happen?

Felis Leo said:
Okay. The news came through a Russian-linked propaganda network. So did the Portland Bible burning happen or did it not happen?
Click to expand...

No one knows. Two books were burned, but there is no credible report that they were Bibles as pushed by Kremlin disinformation sources.
D

Rogue Valley said:
No one knows. Two books were burned, but there is no credible report that they were Bibles as pushed by Kremlin disinformation sources.
Click to expand...

Furthermore, there's no evidence of widespread support for burning any book and there are reports that people around objected.

Yep, I saw this. Along with this, the fact that right wing agitators are known to be in the protests and that Fox News was caught literally manufacturing fake images, all reporting on the protests that's shown in right wing media should be immediately tossed into the garbage.
You must log in or register to reply here.
Share:
Facebook Twitter Reddit WhatsApp Share Link
Top Bottom